Taormina, Agrigento, Palermo, Syracuse, Catania and Cefalù. The typical places a traveller may have heard of when it comes to Sicily. You could be forgiven for not having heard of Vulcano. This small island forms a seven-strong collective called the Aeolian Islands, named after the god of winds Aeolus (and, some say, the son of Poseidon) from ancient Greek mythology. It’s located about an hour and a half’s hydrofoil ferry away from Messina port, accessible via regular direct flights to Catania from the UK.

Vulcano is the second largest of the Aeolian Islands and, as most tourists head straight for the largest, Lipari, it gives Vulcano a relaxed feel where only in-the-know visitors stop by. Therasia Resort and Spa is, without doubt, the highlight of the island. Upon arrival at Vulcano’s port, a shuttle bus will pick you up and transfer you to the gated resort. On the way in, I noticed a heliport which, aside from any island emergencies, can be used by those looking to arrive at the resort in style.

The resort hosts 94 rooms and exudes traditional Sicilian style, with cotto tiles and white and cream ceramics all resplendent in the summer sunshine, while thick, pristine whitewashed arches are both an aesthetic delight and a practical consideration, providing shade for a spot of light afternoon reading.

Before reception, a cute vegetable patch reveals Therasia’s notion of ‘locally-sourced’ ingredients. Olives, capers, tomatoes and grapes – for wine – are all harvested on the island, while the fish is caught fresh daily. There are three restaurants to choose from. I Grusoni is the informal pizzeria that overlooks the infinity pool and superb surrounds – I would recommend this place for lunch. The bruschetta was at its rustic, unpretentious best, while the fresh swordfish pasta – using an unheralded pasta penoni (large penne) – was a particular highlight. 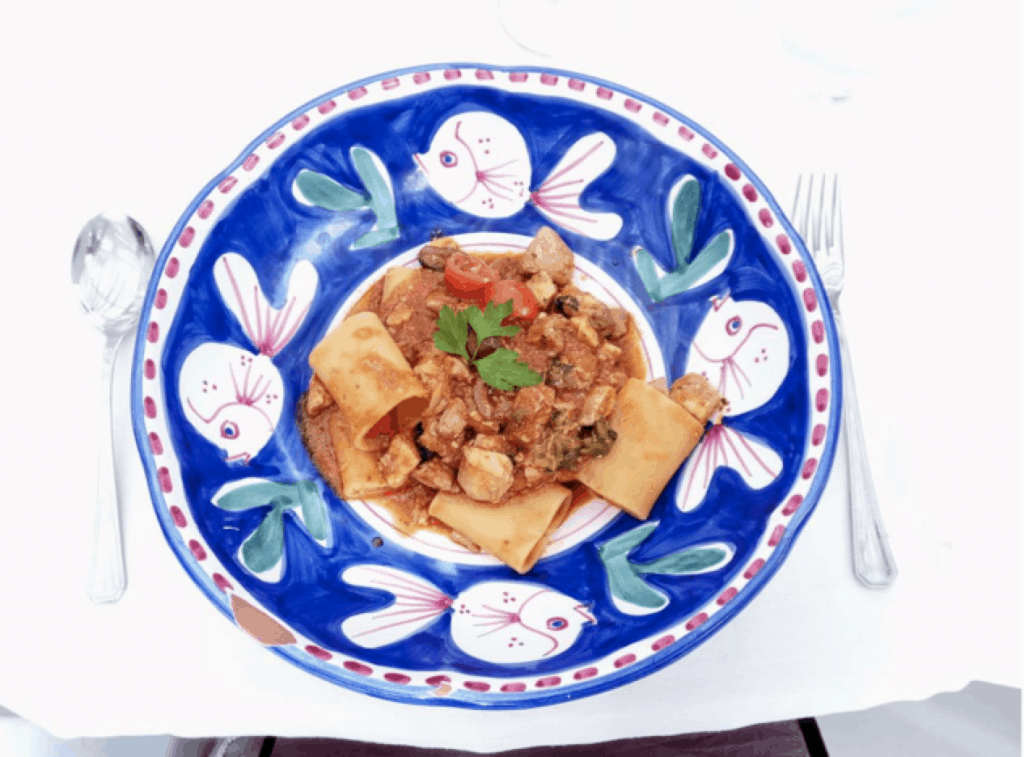 Be sure to be at Il Grusoni in time for sunset. Armed with an evening apertivo, I headed for the dedicated sunset point and was treated to an outrageous panoramic display of oranges, reds and purples before the sun gave way to a star-filled sky.

The other two restaurants, L’Arcipelago and Il Cappero, are more formal affairs. L’Arcipelago offers traditional Sicilian dining and a range of international wines, although the Sicilian wine was all that I was interested in and didn’t disappoint! On a three-night break, I would expect to eat at L’Arcipelago twice, and then perhaps push the boat out for your final dinner by visiting the Michelin-starred Il Cappero. 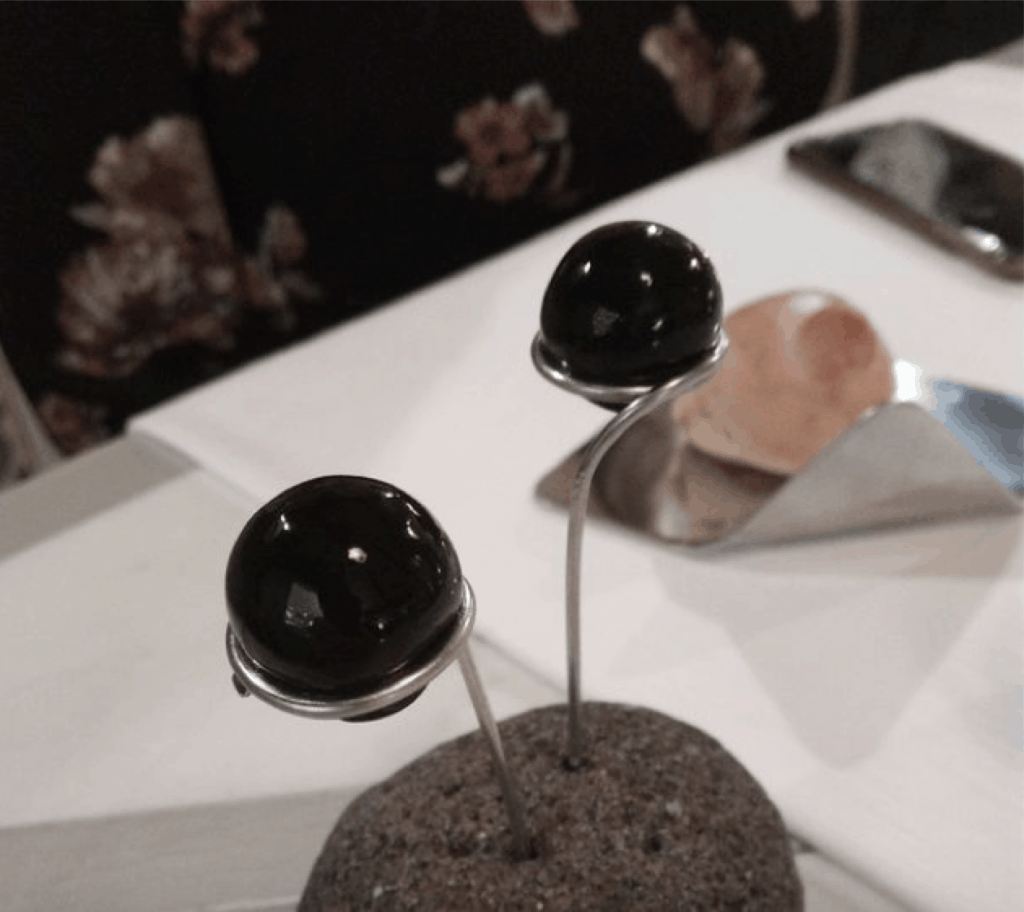 Il Cappero offers a world-class tasting menu, consisting of between six and eight dishes. My first was a pair of olives that had been de-pulped, de-stoned and filled with mussel and caper juice, while the dishes that followed ranged from a ravioni filled with cream of basil and a parmesan foam top, to spatola (spatula) fish with a fennel cream, black olive paste and fresh orange juice drizzle. Between, there was everything from sea urchin ice cream to donkey tartare, although this dish could be swapped for a vegetarian alternative! Each dish was presented in a style befitting Therasia’s setting. The olives were served on volcanic rock, while the star-anise water palate cleanser was served in little message-in-a-bottle vials that reminded one of the remote surrounds. As far as Michelin dining experiences go, this was one that will certainly live long in the memory. A member of my party who requested gluten-free food was equally well catered for and didn’t feel left out.

Breakfast was served in L’Arcipelago and consisted of over 300 options. As expected, a range of typical continental offerings were present, although I preferred to choose from the numerous – and delicious – range of Sicilian specialties. Starting the day with a ragu arancini and cake made me feel a little guilty, but I was assured it was normal for Sicilians! There was a spectacular range of honeys to choose from too – I most enjoyed the thyme, eucalyptus and thistle drizzled over fresh bread.

There are three types of regular rooms – Classic, Comfort and Deluxe – and a range of suites. I stayed in the mid-range Comfort Room. It was immaculate, and I was impressed by the view from my balcony, looking out over the Lipari and a volcano beyond. The Classic Rooms all benefit from expanded balconies – new for 2018 – and are almost indistinguishable from the Comfort Room save for the garden view as opposed to the sea views, and don’t make any other sacrifices that I could tell, making it a great lower-budget choice. Upgrading to a Deluxe – or suite – is a special experience. Generous balconies that afford a spectacular view across the volcanic archipelago in total privacy, while the balcony sunbeds make it hard to leave during the daytime. 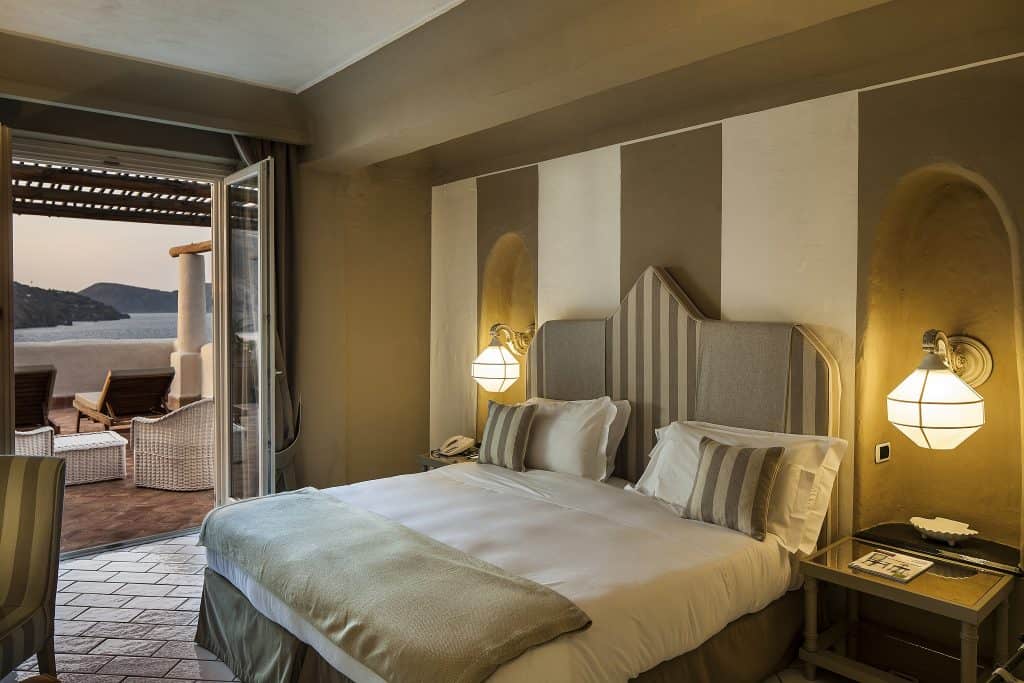 Wellness is taken seriously at Therasia Resort. Visitors can benefit from a warm water pool, sauna, whirlpool, Turkish baths and expert massage treatments, from aromatherapy and herbal face rituals to lymphatic drainage (detox). I would recommend booking a session either the night before or just before breakfast to ensure availability, as some of the treatments are very popular.

Perhaps Therasia’s most striking feature, the double-infinity pool is a true highlight. A daytime dip overlooking the volcanic rock formations is an absolute must. As you dry off, be sure to call an attendant from your sunbed for a refreshing drink; come the afternoon, a local Sicilian beer went down a treat. The other visitors were all very mindful, contributing to the peaceful tranquillity as watching the world go by consists of watching hydrofoils in the distance hop between islands, birds circle the rock formations and pretty sailing boats pass between Vulcano and Lipari.

Rejuvenating, relaxing and rewarding: I thoroughly enjoyed my trip to Therasia Resort & Spa.  The facilities were superb, the location remote and the food was outstanding. May, June and September would be the best months to visit, as the temperatures through July and August may become a little taxing, even with the cooling breeze that son of Poseidon Aeolus gifts this wonderful resort. 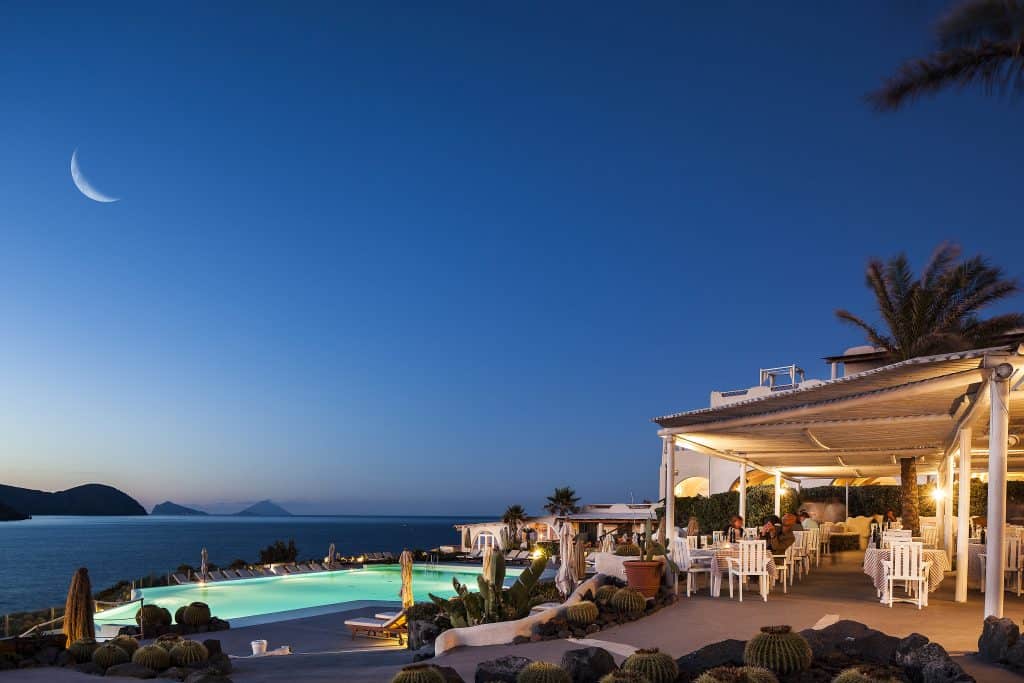